Sensitivity to thermonuclear reaction rates in modeling the abundance anomalies in the globular cluster NGC 2419.
Abundance anomalies in globular clusters provide strong evidence for multiple stellar populations within each cluster. These populations are usually interpreted as distinct generations, with the currently observed second- generation stars having formed in part from the ejecta of massive, first-generation “polluter” stars, giving rise to the anomalous abundance patterns. The precise nature of the polluters and their enrichment mechanism are still unclear. Even so, the chemical abundances measured in second-generation stars within the globular cluster NGC 2419 provide insight into this puzzling process. Previous work used Monte Carlo nuclear reaction network calculations to constrain the temperature–density conditions that could reproduce the observed abundances, thereby placing robust limits on the origins of the polluter material. The effect of individual reaction rates on these conditions has not been studied, however. Thus, we performed an exhaustive sensitivity study on the nuclear physics input to determine which reactions have the greatest impact on these predictions. We find that the 30Si(p,gamma)31P, 37Ar(p,gamma)38K, 38Ar(p,gamma)39K, and 39K(p,gamma)40Ca reactions are all critical in determining the temperature–density conditions, and ultimately, the origins of the polluter material. 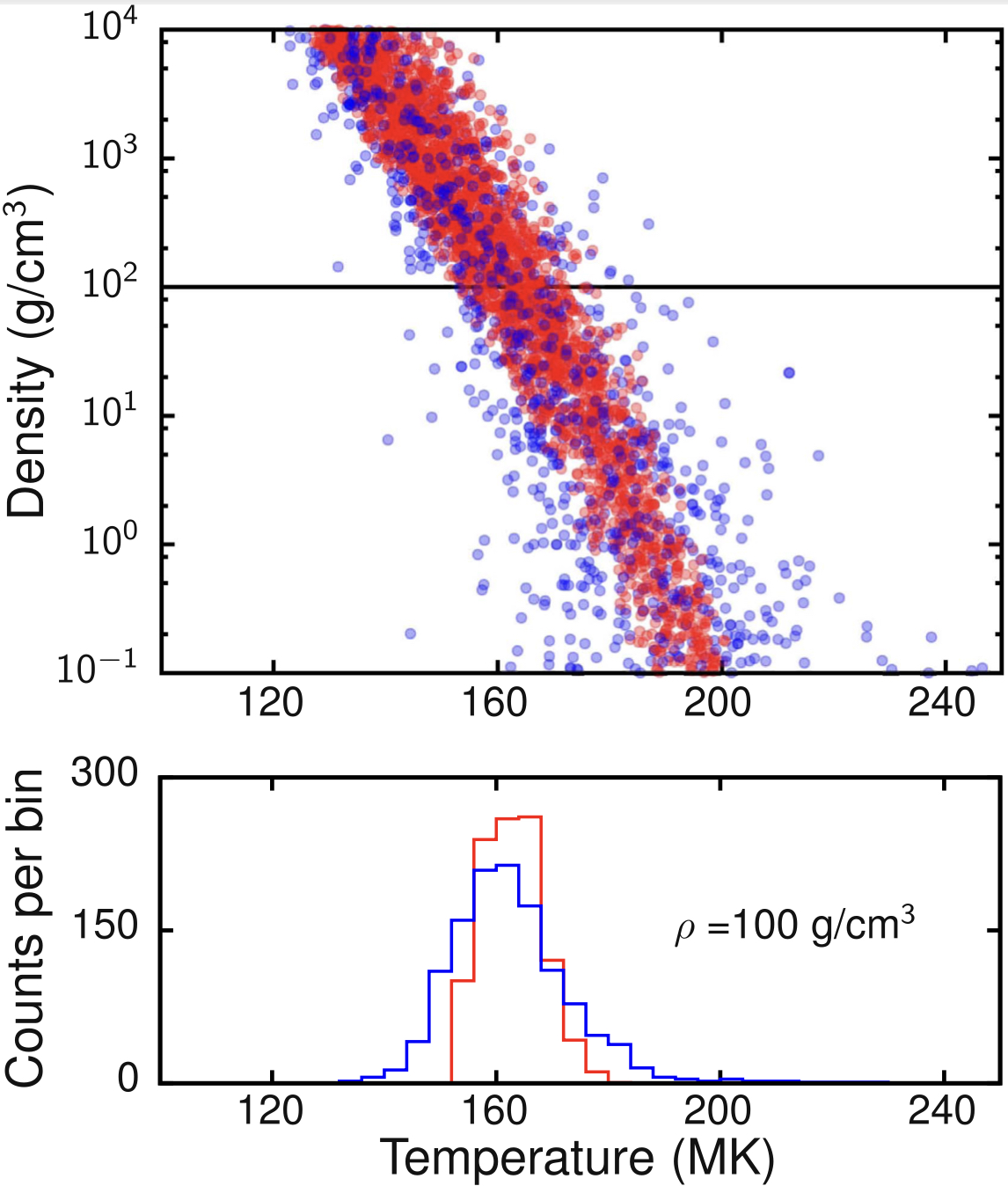 (Top) Constant temperature–density conditions that reproduce measured abundances in NGC 2419. The red dots result from Monte Carlo reaction network runs with fixed reaction rates, while the blue dots result from runs with varying rates. (Bottom) The projection of acceptable solutions onto the temperature axis. Note that the red histogram has been scaled to 30% of its original height for comparison purposes. For more information, see Dermigny & Iliadis, Astrophys. J. 848, 14 (2017). Jack Dermigny is a former UNC graduate student.

Puzzling abundance anomalies in globular clusters.
Globular clusters are of paramount importance for testing theories of stellar evolution and early galaxy formation. Strong evidence for multiple populations of stars in globular clusters derives from observed abundance anomalies. These must have been produced in a stellar population that existed before the stars formed that we currently observe. The unsolved question is: what exactly were these stars of the earliest population (frequently called “polluters”)? The most puzzling example is the recently detected Mg–K anticorrelation in the globular cluster NGC 2419, showing that 30-40% of this star cluster consists of matter that underwent an unknown nucleosynthesis process. We performed Monte Carlo nuclear reaction network calculations using STARLIB to constrain the temperature–density conditions that gave rise to the elemental abundances observed in this elusive cluster. Results are shown in the figure on the left. The acceptable region of the temperature-density parameter space is indicated by the blue dots. We find a correlation between stellar temperature and density values that provide a satisfactory match between simulated and observed abundances in NGC 2419 for all relevant elements (Mg, Si, K, Ca, Sc, Ti, and V). The acceptable conditions  range from 100 MK to 200 MK. This result accounts for uncertainties in nuclear reaction rates and variations in the assumed initial composition. The solid lines show stellar temperature-density tracks for all polluter candidates. Our next step is to measure the key nuclear reactions at LENA to narrow the field of polluter candidates. For more information, see Iliadis et al., ApJ 818, 98 (2016).