The analysis of signal peaks in pulse-height spectra.
The estimation of the signal location and intensity of a peak in a pulse height spectrum is important for x-ray and gamma-ray spectroscopy, charged-particle spectrometry, liquid chromatography, and many other subfields. However, both the “centroid” and “signal intensity” of a peak in a pulse-height spectrum are ill-defined quantities and different methods of analysis will yield different numerical results. We applies three methods of analysis. Method A is based on simple count summation and is likely the technique most frequently applied in practice. The analysis is straightforward and fast, and does not involve any statistical modeling. We found that it provides reliable results only for high signal-to-noise data, but has severe limitations in all other cases. Method B employs a Bayesian model to extract signal counts and centroid from the measured total and background counts. The resulting values are derived from the respective posteriors and, therefore, have a rigorous statistical meaning. The method makes no assumptions about the peak shape. It yields reliable and relatively small centroid uncertainties. However, it provides relatively large signal count uncertainties. Method C makes a strong assumption regarding the peak shape by fitting a Gaussian function to the data. The fit is based again on a Bayesian model. Although Method C requires careful consideration of the Gaussian width (usually given by the detector resolution) used in the fitting, it provides reliable values and relatively small uncertainties both for the signal counts and the centroid. 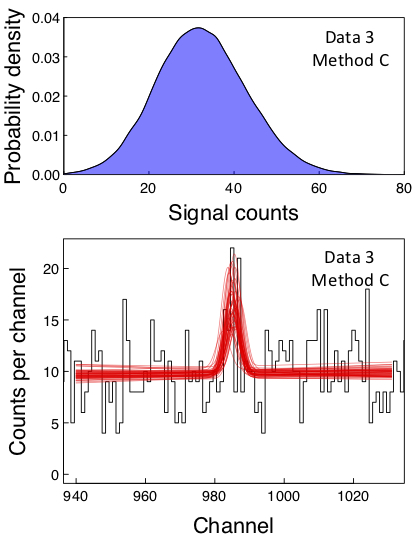 The figure above shows some of our results with Method C. The pulse-height spectrum (bottom panel) was artificially generated with a signal of 35 counts near channel 985. The red lines indicate 50 randomly chosen credible fit lines (from among 50,000 samples). The posterior for the signal counts is shown in the top panel. The estimated signal counts amount to 32+/-11, in agreement with the true signal counts. Notice that the Bayesian model does indeed predict a peak, because the probability for zero counts is vanishingly small. For more information, see the paper by Rodgers and Iliadis, Nucl. Instr. Meth. A 998, 165172 (2021). Cade Rodgers is a UNC undergraduate student.

Gamma-ray spectroscopy using a binned likelihood approach.
The measurement of a reaction cross section from a pulse height spectrum is a ubiquitous problem in experimental nuclear physics. In γ-ray spectroscopy, this is accomplished frequently by measuring the intensity of full-energy primary transition peaks and correcting the intensities for experimental artifacts, such as detection efficiencies and angular correlations. Implicit in this procedure is the assumption that full-energy peaks do not overlap with any secondary peaks, escape peaks, or environmental backgrounds. However, for complex γ-ray cascades, this is often not the case. Furthermore, this technique is difficult to adapt for coincidence spectroscopy, where intensities depend not only on the detection efficiency, but also the detailed decay scheme.

We developed a method that incorporates the intensities of the entire spectrum (e.g., primary and secondary transition peaks, escape peaks, Compton continua, etc.) into a statistical model, where the transition intensities and branching ratios can be determined using Bayesian statistical inference. This new method provides an elegant solution to the difficulties associated with analyzing coincidence spectra. A pulse height spectrum of the 151 keV resonance in 18O(p,γ)19F is shown in the figure above. Instead of only analyzing the net intensities of full-energy peaks, we analyze the entire measured spectrum to find the fractions of the different primary decays (and associated secondary transitions) in 19F. This method is described in detail in Dermigny et al., NIM A, 830, 427 (2016). Jack Dermigny is a former UNC graduate student.

Bayesian S-factors and thermonuclear reaction rates.
The problem of estimating non-resonant astrophysical S-factors and thermonuclear reaction rates, based on measured nuclear cross sections, is of major interest for nuclear energy generation, neutrino physics, and element synthesis. Many different methods have been applied in the past to this problem, which were based on traditional statistics. Bayesian methods, on the other hand, are now in widespread use in the physical sciences. In astronomy, for example, Bayesian statistics is applied to the observation of extra-solar planets, gravitational waves, and type Ia supernovae. However, nuclear physics, in particular, has been slow to adopt Bayesian methods. We derived astrophysical S-factors and reaction rates based on Bayesian statistics. To this end, we developed a framework that incorporates robust parameter estimation, systematic effects, and non-Gaussian uncertainties in a consistent manner. An example is shown in the figure on the left. The lines show a large sample of “credible” S-factors derived from the Bayesian analysis of the available data for the 3He(3He,2p)4He reaction. More information can be found in Iliadis et al., ApJ 831, 107 (2016). So far, we determined Bayesian rates for five reactions and these have been implemented into STARLIB.