Investigation of 11B and 40Ca levels at 8−9 MeV by Nuclear Resonance Fluorescence.
We performed a measurement of 11B and 40Ca levels between excitation energies of 8 and 9 MeV using nuclear resonance fluorescence (NRF). The experiment was carried out with nearly-monoenergetic and linearly polarized photon beams provided by the High-Intensity γ-ray Source (HIγS) facility at the Triangle Universities Nuclear Laboratory (TUNL). States in 11B are important for calibrations of NRF measurements, while the properties of 40Ca levels impact potassium nucleosynthesis in globular clusters. For 40Ca, we obtained improved excitation energies and an unambiguous 2− assignment for the state at 8425 keV. For 11B, we obtained improved values for gamma-ray multipolarity mixing ratios and branching ratios of the 8920-keV level 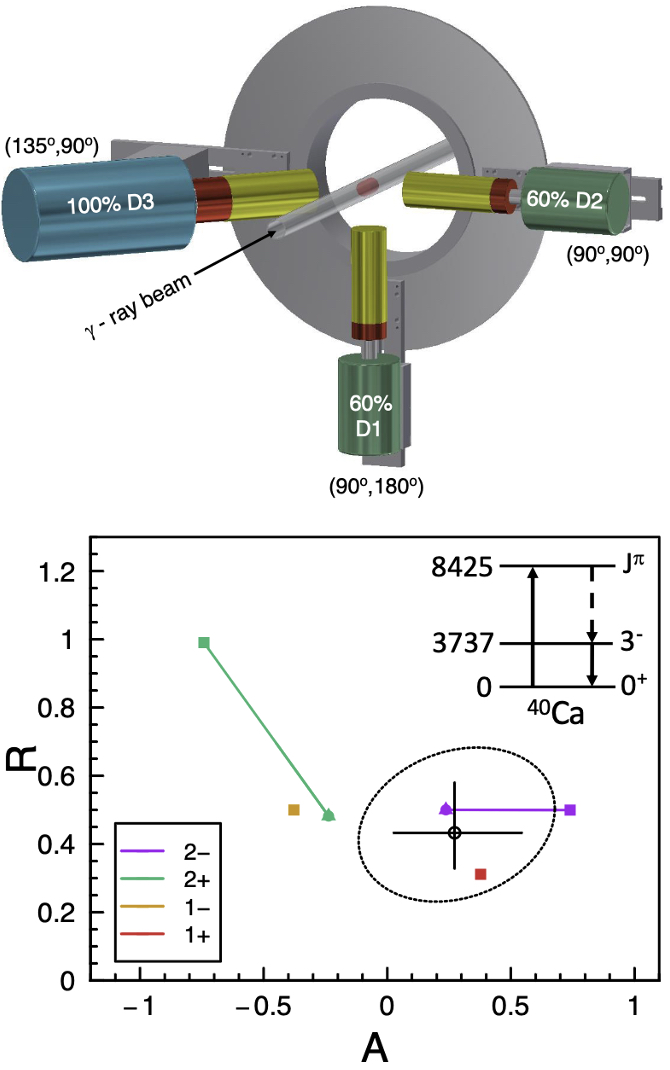 (Top) Setup used for our experiment. The incident gamma-ray beam moves inside a plexiglass vacuum tube and impinges on a sample (boron powder or CaO). The direction of the linear polarization of the beam points parallel to the horizontal plane. The front face of each detector is covered by a passive shield (yellow) to reduce backgrounds. (Bottom) Ratio vs. analyzing power of the deexcitation of the 8425-keV level in 40Ca for the secondary transition, 3737 keV →0 keV, with the primary transition unobserved. The measured values are shown in black. Different colors refer to theoretical values based on given choices of Jπ for this level. The purple and green lines correspond to the theoretical results for a range ofmultipolarity mixing ratios of the measured transitions. The results demonstrate the 2- assignment of the 8425 keV level. For more information, see Gribble et al., Phys. Rev. C, in print (2022). David Gribble is a UNC graduate student.

High-intensity ion-beam study of 29Si(p,gamma)30P.
The thermonuclear rate of the 29Si(p,gamma)30P reaction impacts the 29Si abundance in classical novae. A reliable reaction rate is essential for testing the nova paternity of presolar stardust grains. At present, the fact that no classical nova grains have been unambiguously identified in primitive meteorites among thousands of grains studied is puzzling, considering that classical novae are expected to be prolific producers of dust grains. We investigated the 29Si+p reaction at center-of-mass energies of 200–420 keV, and present improved values for resonance energies, level excitation energies, resonance strengths, and branching ratios. One new resonance was found at a center-of-mass energy of 303 keV. For an expected resonance at 215 keV, an experimental upper limit could be determined for the strength. We evaluated the level structure near the proton threshold, and present new reaction rates based on all the available experimental information. Our new reaction rates have much reduced uncertainties compared with previous results at temperatures of T>140 MK, which are most important for classical nova nucleosynthesis. 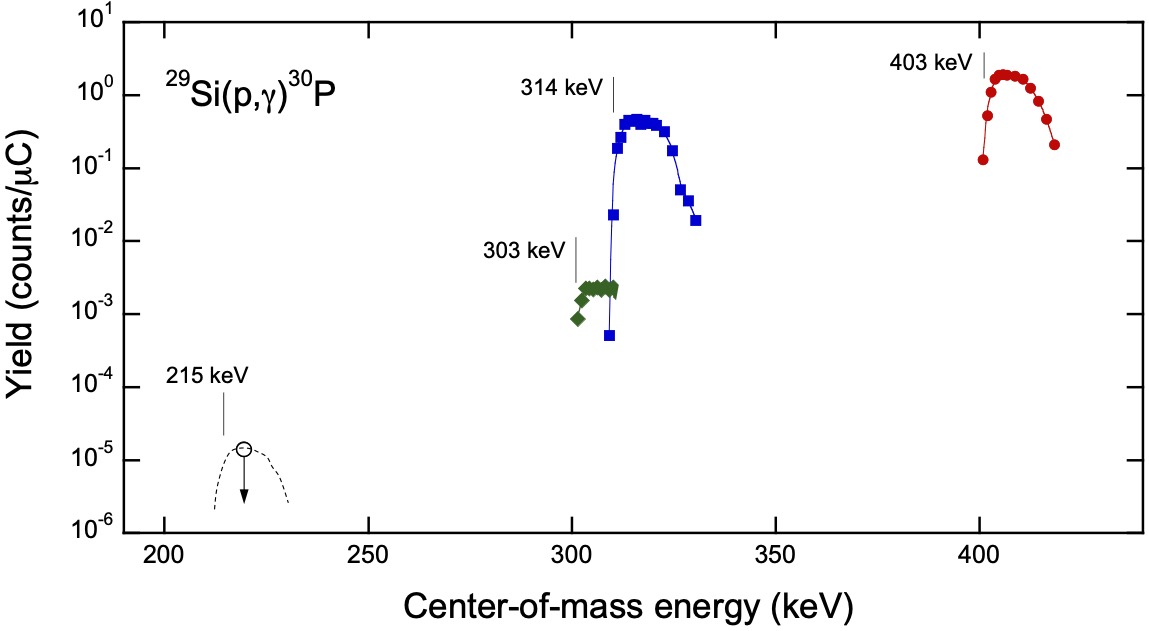 The figure shows our measured yield (for the strongest primary transition, depending on the resonance) versus center-of-mass energy. The 303 keV resonance had not been observed previously. The upper limit for the 215 keV resonance was obtained using a proton beam of 2.1 mA intensity on target. For more information, see Downen et al., Phys. Rev. C 105, 055804 (2022). Lori Downen is a former UNC graduate student.

New measurement of 30Si(p,gamma)31P for explaining globular cluster abundance anomalies.
Silicon synthesis in high-temperature hydrogen burning environments presents one possible avenue for the study of abundance anomalies in globular clusters. This was suggested in our previous study, which found that the large uncertainties associated with the 30Si(p,gamma)31P reaction rate preclude a firm understanding of the stellar conditions that give rise to the Mg-K anticorrelation observed in the globular cluster NGC 2419. In an effort to improve the reaction rate, we present new strength measurements of the Elab = 435 keV and Elab = 501 keV resonances in 30Si(p,gamma)31P. For the former, which was previously unobserved, we obtained a resonance strength of (1.14 ± 0.25) ×10^−4 eV. For the latter, we obtain a value of (1.88 ± 0.14) ×10^−1 eV, which has a smaller uncertainty compared to previously measured strengths. Based on these results, the thermonuclear reaction rate has been re-evaluated. The impact of the new measurements is to lower the reaction rate by a factor of about 10 at temperatures important to the study of NGC 2419. The rate uncertainty at these temperatures has also been reduced significantly. The figure shows our new rate (gray) and the previous rate (blue) versus stellar temperature, where all rates are normalized to the new median rate. At a given temperature, the width of the bands depict the rate uncertainty. Near 0.2 GK, which is important for the Mg-K anticorrelation observed in NGC 2419, the old median rate is higher by an order of magnitude compared to the new rate. For more information, see Dermigny et al., Phys. Rev. C 102, 014609 (2020). Jack Dermigny is a former UNC graduate student.

New measurement of the E = 0.83 MeV resonance in 22Ne(alpha,gamma)26Mg.
The Elab = 0.83 MeV resonance in the 22Ne(alpha,gamma)26Mg reaction strongly impacts the reaction rates in the stellar temperature region crucial for the astrophysical s process. We performed a new measurement at the Triangle Universities Nuclear Laboratory of the energy and strength of this resonance using techniques different from previous investigations. We use a blister-resistant 22Ne-implanted target and employ gamma-gamma-coincidence detection techniques. We found values for the resonance energy and strength of 835.2 ± 3.0 keV and (4.6 ± 1.2) × 10^−5 eV, respectively. Our mean values are higher compared to previous values, although the results overlap within uncertainties. The uncertainty in the resonance energy has been significantly reduced. The spin-parity assignment, based on the present and previous work, is Jpi = (0+, 1−, 2+, 3−). High-intensity ion beam study of 17O(p,gamma)18F.
Hydrogen burning of the oxygen isotopes takes place in low-mass stars, asymptotic giant branch stars, and classical novae. Observations of oxygen elemental and isotopic abundances in stellar spectra or in presolar grains provide strong constraints for stellar models if reliable thermonuclear reaction rates for hydrogen burning of oxygen are available. The figure on the left shows the astrophysical S-factor for the 17O(p,gamma)18F reaction, measured at LENA (red) or elsewhere. Our experiment was performed with significantly higher beam intensities (2 mA) compared to previous work and by employing our γ-ray coincidence spectrometer. The three lowest-lying blue data points were measured at the deep-underground LUNA facility, but represent activity or secondary transition measurements. Our two data points (red) below 200 keV represent the lowest-energy S-factor measurement that detected all relevant in-beam transitions (i.e., primary and secondary). The results impact our understanding of the origin of 17O in the Galaxy and of how matter is transported and mixed in stars from the interior to the surface. This work is published in Buckner et al., PRC 91, 015812 (2015) and is also presented on the U.S. Department of Energy (DOE) website as a “Science Highlight”. Matt Buckner is a former UNC graduate student.